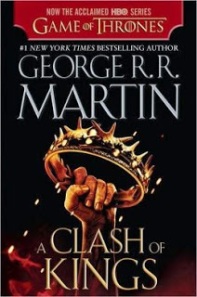 I finally finished reading the second book in George RR Martin’s saga A Song of Ice and Fire and despite the fact that I felt the need to slow the reading down a bit, I really liked the way he worked the story.

As we read, the story grows further and further apart from what’s presented to us on the TV show and my interest rises. New characters gain a significant voice and the plot extends, taking on new shapes. You will get to know new places and people, and even have some past events finally explained in greater detail.

The story becomes more dense and it could prove complicated at first (specially for those who don’t even follow the TV series) but the amazing writing will help visualize the complex political intrigue, the crude bloodshed aswell as the mystic and magic which is rising throughout the whole realm.

The book is deeply involving, largely due to the characters that are so alive and complex, full of ambiguity and not the classic good vs evil dichotomy we’ve grown used to. At Westeros, most of the people do not fight for ideals but for power or even safety. There are no stupid opponents to facilitate anyone’s life, the characters are clever and learn with their mistakes, increasing the intrigue in all fronts.

George RR Martin does not romanticize life and its’ events, making sure the atmosphere is full of dark and somber lighting, battles are not glamorous and most of the scenes are raw and crude, just as they ought to be.

As a fantasy book, the author calls upon some mystical or magical elements, but he manages to do it in a way in which the story doesn’t lose credibility or it’s grasp on reality.

The story remains surprising and the third book is already on my ‘To Read’ list as we speak. 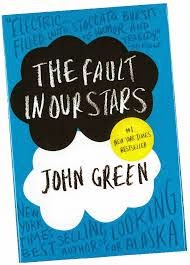 I met this story through my former students, sweet teenagers that love a good romance, filled with a lot of tears and crazy passions. At first, I ignored it, but then, I got curious. So, I saw the Twentieth Century Fox movie. Despite the depressing side, I liked the story, I liked the idea but… it seemed kind of superficial to me. So, I decided to read the book.
This is a very sad story and at same time it has that kind of optimism that only teenagers still possess. It focuses on the slight ironies which life presents to us and makes us think about our problems and “complaints” and… well, everything seems so ridiculous after reading this.
It’s an interesting story, not just another story about a person who happens to be dying from a terrible disease. This person has a life, has thoughts and dreams, has something more than this disease and this is what truly matters.
I love the provocative way Hazel thinks about her own condition, and tries to prevent it from becoming her whole life. She wants to live, wants to be ready, and even more importantly, she wants her family and friends to be ready for what seems inevitable and she makes damn sure that they know how to continue on with their lives without her. But life… well it’s weird and plays with us everytime.
In conclusion, some very good reading. Inspiring. 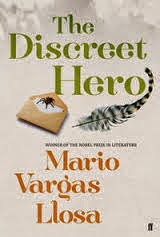 The Discreet Hero is a book from 2013, translated to english in 2015. The writer, Mario Vargas Llosa won the Nobel prize for literature in 2010.
In The Discreet Hero, the protagonist Felício Yanaqué lives his life according to his father’s last teaching “Do not let anyone step into you.”, as a way to honor his memory. But life is tricky and Felício’s principles will be put to the test.
An unconventional hero, without the dramatic overtones of the movies, but filled with honor, Felício is a real life hero, those who no one will never know about, yet they can proudly shape their own destiny, with honesty. Our protagonist fights against the status quo, which he thinks is wrong, and never gives up, although, the world around him keeps saying that this is the rule.
But Felício is not the only hero in this book. Along its pages we can read two different storylines, unrelated at first, but in the end they will share a fate.
The main conflicts arise inside the characters, most of them very introspective during the whole story.
In The Discreet Hero, we see a series of complex family relationships where the reader is confronted with the differences between two generations. One, a generation of hard workers, who fought all life to have what they own now and the other, their spoiled sons who never had to fight for anything and who believe it’s their right to have anything they want.
The focus of the book is on loyalty and ethics (which the characters may or may not have) and the romance isn’t centered in a crazy young love, but in the maturity of the years and in the calm passion of difference.

This site uses Akismet to reduce spam. Learn how your comment data is processed.

This blog serves the purpose of helping all of those who likes to write to get technical information as well as, having a safe harbor to discuss ideas.

Do you love writing? Check this out!

How to Write Short: Word Craft for Fast Times