It’s normal to hear people talking about inspiration as if it’ll solve any problem and as if it’s the major part, or rather plays a very big one, in being a writer (or any kind of artist, really), but if you’re a writer, you know that not to be true, and if you’re the kind of writer that waits for a moment of delightful inspiration in order to actually write… well, you’ll doing it wrong.

Inspiration is nothing when compared with all the hard work that writing actually involves. If you’re inspired today, that’s amazing, go, go off and write, but if you aren’t, you must try and do it anyway. You just need to pick up your laptop (or pen) and write, no matter what.

Actually, not being inspired can be a good thing. Why? Because you should explore all of your humors, moods and feelings in order to go deeper within your writing. Emotion is pretty good (even if we’re talking about a negative one) in order to improving your writing, especially if you’re working within the realm of fiction.

Bad moments are normal, and expected anyway, however, if you’re constantly feeling an absolute lack of motivation, you probably do need a bit of inspiration. Watch a movie, read a book, take a walk… Something will eventually make you feel better again, more like yourself and thus, like writing again. But, be careful!

Sometimes, you let yourself go, clutching to your inspired moments alone, and you feel like you’re writing like never before, the characters are perfect, the story flows at a speed never seen before and later face the reality of it… well, is it really an original idea? Is it good enough? Easy ideas are tricky…

It’s part of being a writer to feel passionate about writing, about your work, but it’s also a big part of it to deal with those moments where you found no passion at all, so let’s talk about how to get over them.

Imagine that you’re writing a novel and you get stuck in a certain part of it, but you know exactly how you’d want another part of your book to be written, so… go write it! Get back to the point you’re in now, when you’re finally ready.

Sometimes, a change of scenery is a great help too, go write anywhere else. There are other days when you need to start something totally new, maybe write a new book, within a different genre, or how about writing one paragraph of your story, using other character’s voice and deepest thoughts? Did you like it? So, go on, carry on then!

And, for me, the major rule (and the most difficult one to follow) is: try not to worry! If you worry too much, you’re not only harm your writing, you’re harming yourself, as no one is perfect all the time… Just accept that and keep on trying. It’s hard, but it’s definitely worth it.

I started this campaign with the goal of promoting both young authors and their work, and I think that Kristofer Young totally deserves to see his work grow.

So, I’m counting on you to give him a change, read his great book and hopefully spread the word. 😉 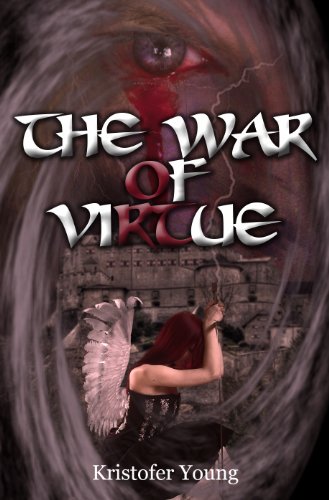 Synopsis: What if you discovered that there was a war being waged over humanities existence? That this war was fueled by the deeds of men? Daniel soon learns the truth and finds more than he bargained for when he is suddenly thrust into the middle of this conflict. He, and many others like him, joins angels who are defending a fortress, the last line of defense that protects a portal which grants passage to the mortal plane of existence…our realm. They must stand together against an army of demons trying to cross over and wreck havoc on humanity. Daniel and his allies face tough battles ahead as their strength is pushed to the limit and their courage is tested. Can the human race survive or will they be destroyed by their own demons?

This work can be acquired through:
https://www.amazon.com/War-Virtue-Kristofer-Young-ebook/dp/B00CXG1ZOE#nav-subnav

Here I am, talking about my new project again. When I first decided to start doing it, I already knew that it would be a great challenge and that I would have to deal with a lot of things at the same time. But now, after completing the first chapter and some more drafts on a few of the other ones, I have a more accurate idea of how challenging this will be.

The first chapter talks about my childhood and it made me remember a lot of small things that I thought I had forgotten. That’s not the bad part though, it actually helped me understand some of my past choices and made me think about my evolution as an individual, realizing how I became the person I am today.

But, it also made me realize that there are a lot of people implicated in this book. People who knew me, people who, even if I hide behind a pseudonym, will recognize the story and identify me and the situation I’m talking about. People who might want to remain unidentified.

I knew this would be a reality as soon as I published the book, or whenever someone who knew me dropped by Twitch and by pure chance stumble upon one of my broadcasts, right? Right? No. Actually, I was focused on so many things, but never on the fact that some people who are closer to me in real life, would see or know that I was working on this and it might contain some information that concerns them (even if anonymously). Therefor, it’s harder to exposed myself to these people than to the rest of the world. I can’t really give you a detailed explanation as to why, but it is.

So, I started to think “What am I really afraid of here?”. Was it the fact that some people would not believe some of it? Or the fact that they would, or at least might? Do I fear that they would start treating me differently? Am I afraid of what they might think about me, or is it about the fact that I decided to expose myself and somehow, in some way, expose a part of themselves as well?

It’s everything and it’s nothing. It turns out that it’s just really scary.

But that’s not the only challenge. After 5 minutes LIVE on Stream, I realized how hard writing here can be, knowing people are reading at the same time the ideas are popping out of my mind. It’s a lot of things to worry about at the same time, really.

First I tried to write with the camera. It was hard. I felt the need to talk to the people who were watching, explain what I was doing, and at the same time, keep writing. It was exhausting and the ideas didn’t seem to come so naturally. I tried to write, explain, answer the chat’s multiple questions and comments and, in the end, I had written about 2 or 3 pages, full of tiny mistakes and lacking quite a bit of information. It clearly wasn’t working all that well.

I tried to think about some alternatives and eventually the idea of giving up on this definitely crossed my mind, but I can’t bring myself to do it. I have a goal with this book and I really want it to work, so I looked for other streamers that were writing LIVE, in their own broadcasts.

Despite the fact that their work is quite different, since it’s mostly fiction, they didn’t seem to share some of my concerns or feel some of my issues. Since the truth is that they were writing as well, I decided to see how they went about it. I quickly noticed that some, quite a lot of them, didn’t use a camera.

I decided to try it this way, and guess what… it helped! It actually, made me feel safer in my own environment somehow. But, it has some other problems too. When you have a camera and a microphone, you can often keep people entertained, even in the moments you are not doing anything. You can think out loud and sometimes they even interact with you due to those thoughts, or even interact and exchange ideas amongst themselves, but this way, without any visual feedback of what YOU are doing, the human being, there was a lot more dead time or dead air. Nothing was happening, because I was often thinking, not writing…

This was really frustrating and, for a while, I thought that this was a really bad idea and I should give up before it was too late. Next day I thought: too late for what? Get over it!

Then I tried again. This time, I made some preparations before stream. I fed my baby right before starting the stream (so one less thing to worry about), wrote some ideas that I wanted to explore on a piece of paper and decided to hit that start button. The ideas on that paper worked like a guideline and before I had even realized, it had been almost 2 hours of relaxed writing! Actually, for quite some time there, I think I actually forgot I was LIVE.

Though this was easier this time, it still didn’t prove easy. But I’m pretty sure, that in the end it will be worth it. Next chapter: adolescence.

This blog serves the purpose of helping all of those who likes to write to get technical information as well as, having a safe harbor to discuss ideas.

Do you love writing? Check this out!

How to Write Short: Word Craft for Fast Times